Where did the game corn hole get its name? 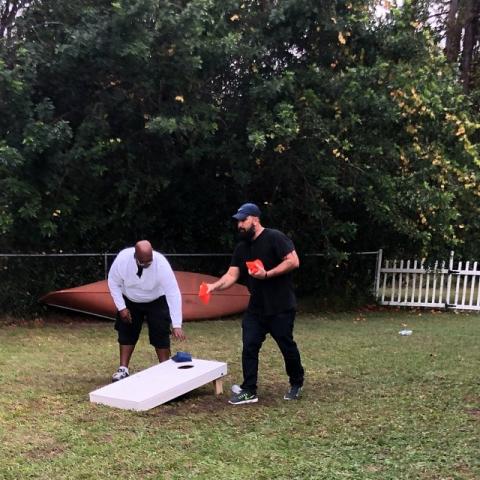 Hot days, iced tea, hamburger and hot dog smell filling the air, and all-out war with family members during grand cornhole matches. There is nothing more reminiscent than memories like these. Of course, there’s always some point in everyone's life where they wonder, why cornhole? As nostalgic and fun as cornhole boards are, the mystery of where its name came from still has no clear answer to this day. Yet, there have been many theories about where this game started, and there is a grand rabbit hole for anyone who wants to dig deeper.

Some say that the game started more than 600 years ago somewhere in Germany. In a time when corn was in abundance and used more for weight than for food, it was the best solution for a simple problem. The game first started out with rocks, that's right not corn, but stones being thrown into a hole into the ground. As the story goes, a one “Matthias Kaupermann, a Bavarian cabinetmaker, was strolling through his village when he noticed some children playing a strange game: they were passing the time by taking turns throwing large stones into a hole in the ground”. So this carpenter, concerned with their safety, went home and made the first cornhole board. He replaced the children's rocks with sacks of corn so no one would get hurt. Then again, this is but one legend as to how cornhole got its name.

On to the next theory, some say that it was the native Americans that created the game and inspired the colonist to play. They were also credited with the start of soccer and lacrosse, so it’s no surprise adding one more to that list. Although, far from how we know cornhole, they used animal bladders filled with beans to throw into holes in the ground.

Now then, there is a close fight between Kentucky and Ohio for the claim on the bean bag toss game. A Kentucky farmer, Jebediah McGillicuddy, claims that he created the game for his friends and family to play. His family loved the game so much that he recreated the game for the rest of his community and it went on to become a huge hit. In Kentucky though, the people refer to corn hole as its other name, hillbilly horseshoes or bags.

On the other hand, Ohio would challenge that claim. Cincinnati to be exact claims to be the home of the beloved cornhole boards. However, this claim might have a little bit more credibility than the others. Matthias Kaupermann, remember the German cabinet maker from before, well it's said that he moved his family from Germany all the way over to Cincinnati. You see, Ohio has a large population of Germans, so it would seem plausible for this to hold value. The theory continues that Kaupermann brought over his perfected cornhole game and shared it with everyone else. Of course, even to this day, Cincinnati is still insanely obsessed with cornhole boards.

So there is no accurate answer. All of these theories make some sense and hold plausibility. In fact, all of them could very well be true. A game comprised of throwing objects into a hole isn’t really something hard to come up with. What made Cornhole famous was its simple rules and ease of play. It was also popular because all different kinds of age groups could play together and still have fun. As the game grew the mystery behind the name and origins only added to its charm.

How to play Cornhole

For those that have not played, here is a quick rundown on the standard rules. First is the setup:

That’s it, the game has successfully been set up. Now for the fun part. Here are the rules:

Finally, this is how the game is scored. Here is how to win:

These are the official rules, but many play the game by their own rules. Some common non-official rules are playing until exactly 21, going over resets your score to 11. Another way is to count every point for 13 rounds instead of going to 21 points. Of course, there are an unlimited amount of ways to play the game, these are only a couple.

If you’re looking into getting into playing cornhole it might also be good to know about some of the terminology used when playing. So if you’re visiting a friends house for a party and they have a jolly game of cornhole going these are some of the words that you might hear:

Great, you're an expert now, even if it’s your first time playing, you may have a chance against long-time veterans.

With the growth of its popularity, tournaments have now sprung up to test what the people are made of, probably mostly corn. Either way, The American Cornhole Association(ACA) hold competitions all around the United States. They have official rules and board sizes that have to be followed. They also team together with many non-profit causes to help those in need and raise awareness for many organizations.

The American Cornhole League is also making a name for itself. It’s trying to turn the favorite tailgating sport into an actual tv sport on ESPN. There’s even a decent chunk of money involved for the players. ACL ranked Cody Henderson number 1 in the tournament last year with Cody bringing home about $25,000. Henderson states that every day after his job he runs 3 miles every day, and then tosses bags into his board for a few hours. The dedication alone for such a simple game has lead him to become one of the sport’s most successful players. Achievements like this are turning the once fun past-time game into a real sport.

The Market of Cornhole Boards

Custom made boards have grown in popularity as well. Imagine setting up on the beach playing on a custom made cornhole set, drawing in others and inviting them to play. Maybe it's a barbeque, and you’ve set up a nice cornhole board to entertain guests, interesting sets are a great conversation starter. Tournaments also have custom boards made for each game. Many businesses like pubs and sports bars, set up cornhole board games for their customers to play. This leads to great advertising opportunities. Imagine having your logo on a game that brings so many people joy. So, there are many reasons to own a custom cornhole set, so investing in one is a great idea.

Even though its origin may be a bit hazy, the future of cornhole is clear and unwavering. More than just a game, the business of cornhole boards is still ever growing as well. With its hold in tailgate parties, family get-togethers, and even tournaments the need for this game has improved immensely.